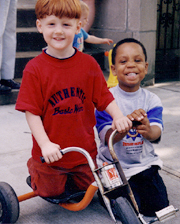 THOUGH ORIGINALLY A “PLANNED COMMUNITY” developed for an emerging Brooklyn middle class, today Lefferts Manor prides itself on the diversity of the residents living in the neighborhood. First-time owners renovating their homes live next to retired grandparents who raised several generations in the same house. The large Caribbean population, the many artists and musicians, and the young families all enjoy the beautiful homes, convenient amenities, and friendly sense of community that the Manor offers. As Borough President Mary Markowitz, for many years the area’s State Senator, put it: “What’s special about Lefferts Manor: people from various walks of life, religions, races, creeds, nationalities, sexual affiliations or preferences, all joining together to make a neighborhood work.”

Residents of Lefferts Manor participate in block parties, an annual flower barrel planting in May, and a Family and Friends Day in nearby Prospect Park. Neighbors work together to clean the streets, play together at progressive dinners, and watch out for one another. “When it snows in the winter and you’re not here, somebody shovels you out,” says a resident who has lived in the Manor since 1978.” They pick up your mail. They walk your dog… Everyone looks out for each other…It’s a pleasure.”