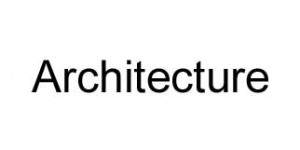 The architectural structure of Lefferts Manor as a rowhouse neighborhood has survived virtually unchanged since the time of its development. By 1899 four houses were built and sold.  507 homes were constructed between 1905 and 1922.  The final three houses were built on Maple Street in 1952.

Every effort was made to distinguish Lefferts Manor houses from the monotony of identical rowhouses that marked so many city neighborhoods.  Architecture in the Manor derives it attractiveness and vibrancy from the juxtaposition of disparate styles.  Even houses within a row differ in ornament and detail. Brick, brownstone, and limestone were used in different combinations and colors to create contrast.

Lefferts Manor received landmark designation from New York City in 1979.  In 1992, it was added to the state and federal registers as an historic site. 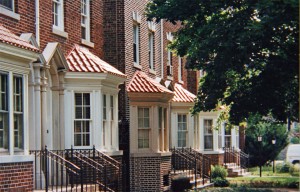 Neo-Georgian and Neo-Federal style brick houses on Midwood Street built between 1922 and 1924.  These semi-detached houses allowed for shared driveways to accomodate the new era of the automobile.

Representing the transiton from late Romanesque Revival to the Neo-Rennaissance style, these Midwood Street rowhouses were among the first buildings in the district in 1898.

Neo-Tudor rowhouses on Rutland Road, built 1914-15.   Although a common style for freestanding frame dwellings the neo-Tudor was not commonly used for rowhouses.  Note the rhythm of the alternating flat-arched and rounded doorways and windows, and the angular oriels (bays). 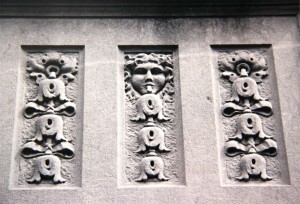 One of many ornamental relief styles bordering front doors and windows.

Neo-Rennaisance row on Rutland Road. The concern of early residents for light and air and greenery continues today.

Houses in the Manor are set back from the street by at least fourteen feet, providing space for front staircases and gaslights which serve both ornamental and practical functions.

Row of houses on Rutland Road, designed by Axel Hedman.  Built in 1908 with many neo-Renaissance elements including alternating round and angular bays and high dog-legged stoops.

This entry was posted in PLG History and tagged architecture, centennial, historical, landmarks. Bookmark the permalink.