John Lefferts died in 1895 marking a turning point in the transition of rural farm lands to suburban residences. Breaking with patrilineal traditions, he willed his property to his seven children who knew the value of the land was in cash, not crop production. Within six months of his death, his heirs carved the land into 600 lots for sale.

His son James envisioned developing a residential neighborhood of quality housing with an “aura of respectability.” Lefferts Manor was planned as a rowhouse neighborhood, affordable to the newly emerging middle class seeking suburban comfort away from the grime and drudgery of overcrowded Manhattan.

To ensure that the neighborhood developed along a path to his liking, James Lefferts attached a restrictive covenant to the deed of each lot requiring that, in perpetuity, housing be designed and used only as private one-family residences. The covenant would not permit commercial use of property, rooming houses, and multiple family dwellings, Lefferts specified that the homes be at least two stories, constructed of either stone or brick, and a minimum of 14 feet from the curb. They would cost a minimum of $5,000 to build — a substantial amount, yet still affordable to Brooklyn’s emerging middle class.

The covenant was a selling point in the late 1890s. The new middle class could feel relatively secure knowing that what they viewed as disruptive effects of tenements and boarding houses would be kept at bay by Lefferts’ restrictive covenant. 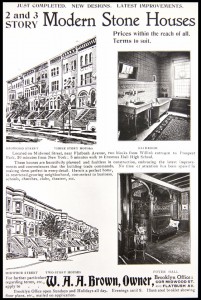 Advertisement from The Erasmian — A Monthly Journal Of School Events
(From Erasmus Hall High School, c. 1901) 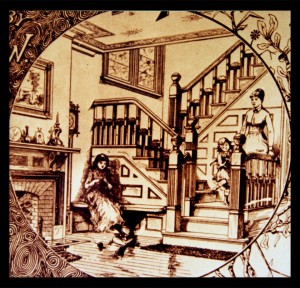 Typical hallway in a Lefferts Manor home.
Since visitors were usually first received in the hall, Victorian architects drew eleborate designs for the decoration of hallways and central staircases. 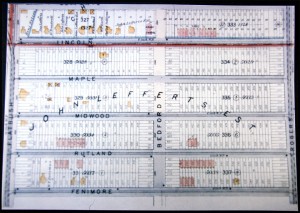 1898 map of Flatbush showing Lefferts Subdivision with uniform, rectangular lots of 20 by 100 feet, with only a few rowhouses completed (shaded areas). 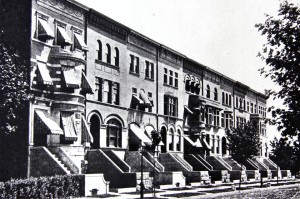 Representing the transition from late Romanesque Revival to the Neo-Rennaissance style, these Midwood Street rowhouses were among the first buildings built in the district in 1898.

From the book, Flatbush Past & Present) 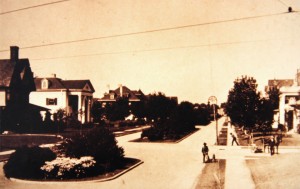 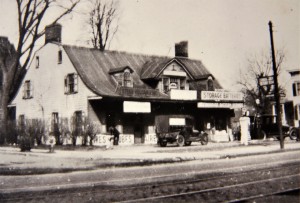 Vanderbilt House, a Dutch farm remodeled into a store, on Flatbush Avenue, c. 1915

Flatbush Avenue, once the picturesque village’s main street lined with trees an Dutch farmsteads, developed into a comercial thoroughfare. Though near Lefferts Manor, lots along Flatbush avenue were not covered by the single family covenant and by 1920 most of the farmsteads had been either coverted or replaced by commercial structures and apartment buildings. 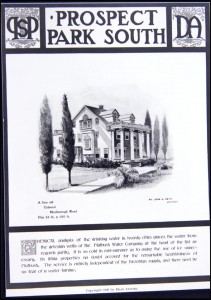 If you are tired of the “telescope” or blockhouse type of residence take the Kings County “L”, Flatbush line, alight at Beverly Road, Prospect Park south, and look at this fine old colonial, which stands on a large plot in the midst of a beautiful lwan. Twelve rooms, lighted by electricity, open plumbing, every possible convenience. Asphalted streets, adjoining residences of the largest type. Two blocks from Prospect Park.

(From the book Prospect Park South) 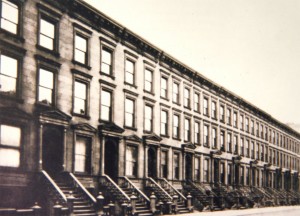