The Lefferts Manor Association held its General Membership Meeting on October 25, 2008 at The Church of the Evangel.

Committees reported on recent activities and the membership elected a new board member before invited guests spoke, including Deputy Inspector Simonetti of the 71st Precinct, Congresswoman Yvette Clarke, and of course, Brooklyn Borough President Marty Markowitz.

Deputy Inspector Simonetti of the 71st Precinct spoke about various investigations and NYPD initiatives in the neighborhood, including the COP program. He has increased the Community Affairs force to eleven officers, which he believes will improve communication between the neighborhood and the precinct. Recently several people using personal digital assistants and iPods have been robbed while walking down the sidewalk Ð the police advise parents to warn children not to use their electronics as they walk home.

Finally, he encouraged residents to call the police with any specifics about illegal activity, especially drug related, and promised to ask the NYPD about privately funded police cameras after a resident offered to pay for the installation of one at the corner of Maple Street and Flatbush Avenue.

State Senator Eric Adams, State Assemblyman Karim Camara, Congresswoman Yvette Clarke, Borough President Mary Markowitz, and Karl Cohen, President of the 71st Precinct Council all attended the meeting, speaking briefly and encouraging residents to contact them with concerns and ideas. Finally, both Clark and Markowitz presented LMA President Ben Edwards with citations recognizing his dedication and contribution to Lefferts Manor and the greater neighborhood Congratulations Ben, and thanks to all the members who attended and participate in the association! 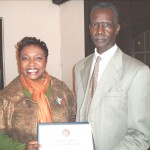 This entry was posted in News and tagged community. Bookmark the permalink.