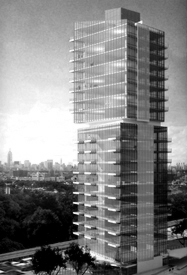 Controversy about the proposed glass tower on Lincoln Road dominated neighborhood news for a period last summer. The economic downturn appears to have put this project, like so many others, on hold for the time being. The Lefferts Manor Association has not taken a position on this project, but, the following article, provided by Jan Clausen, of a group called “Concerned Residents of PLG” and “ pro-tower” arguments, from the Hawthorne Street blog, illustrate the range of opinions throughout our neighborhood:

”Concerned Residents” Call for Responsible Development
On May 20th, Concerned Residents of Greater Prospect Lefferts Gardens hosted a public meeting in Grace Church chapel to address concerns about the neighborhood’s future. Front and center on the agenda was the 23-story glass apartment tower planned for 27-35A Lincoln Road. Speakers also pointed to skyrocketing rents, abusive landlords, and worries about our area’s vulnerability to the displacement that accompanies unchecked gentrification.

A standing-room-only audience heard about the glass tower’s inappropriate scale in relation to surroundings, its environmental impact (glass towers are often lethal to migrating birds), the visual intrusion of a skyscraper looming over Prospect Park, and the safety issues involved in high-rise construction. Presenters addressed the need for re-zoning to encourage contextual development. At the end of the evening, most of the estimated 140 audience members signed up for committee work.

During June and July, Concerned Residents continued no track construction, permitting, and zoning issues related to the glass tower while initiating a tenants’ rights project. On June 21, the group held a ‘Rally for Responsible Development,’ kicking off a petition campaign aimed at promoting dialogue between the developer and the community. Members have met with several local officials in an effort to secure appropriate oversight, including a Department of Building audit of all architect’s plans and worksite permits. In contrast to the overwhelmingly positive response at the May 20th meeting, Internet discussion of the group’s activities has been mixed. In the words of Deborah Mutnick, a Midwood Street homeowner and PLGNA board member, ‘Some supporters of the tower argue that the development isn’t displacing anybody; nobody was living there. But they miss the underlying reality that luxury condos, which is how the building was described by the Daily News, will drive up already high prices and high rents’. The tower is part of a larger process of gentrification that was already underway here. We can shrug and say there’s nothing we can do; it’s a citywide phenomenon. Or we can try to effect policy change and shape the neighborhood’ development positively Adds Nsenga Bansfield-Maathey, an architect who is raising a family on Sterling Street, “I know gentrification is a complicated issue, wrapped in all kinds of racial and socioeconomic and political goo. But in the end, this is not about zoning rights or including a token amount of ‘community space’ in a luxury glass tower. It is about RESPONSIBILITY. Who is willing to take responsibility right now (NOT when it is too late) for the positive, inclusive, diversity-conscious development of our neighborhoods?”

list of reasons why I approve of the project:
By Charles Star, reprinted, with thanks, from The Hawthorne Street Blog

* The location of the building ‘on a commercial strip next to a transit hub’ is ideal for a large development. Clustering housing near subway stations and bus routes is environmentally beneficial; it decreases urban sprawl, makes maintaining transit infrastructure more efficient, and helps reduce auto traffic.

* Opponents of the building claim that the addition of luxury apartments to PLG will increase rents and price out many long-time residents. But limiting housing and refusing to build for density has the same effect. Fewer homes means greater demand for them and higher prices. The Tower is located right next to the subway; apartments on lower floors will, by necessity, be lower cost.

* The location, a prime commercial space, has sat dormant for at least a decade, a nightmare of asbestos, mold and vermin. Increased foot traffic will create a safer, more lively commercial block.

* The builder has not asked for any exemptions from FAR or public subsidy.

* The residential blocks of Lefferts Manor and larger PLG are separated by Flatbush Avenue.

* The building is not actually going to be built on Ocean Avenue; it is set back a block from the street, reducing its visual impact.

* The building is not unprecedented. Patio Gardens, located about a block away, is nearly as tall. And a number of tall buildings can be seen on all sides of the park. 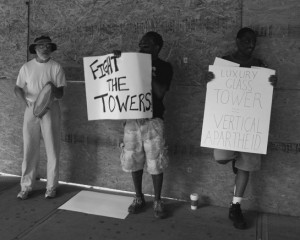 Following a protest, by members of Concerned Residents’ in July, Mr. Star added the following:

The ‘Concerned Residents’ claim that the tower will lead to higher rents and landlords harassing long-term tenants out of their apartments. The effect of the tower on rents is, at best, indirect and likely negligible; its effect on other landlords is irrelevant. For one thing, the building is likely to be mostly–if not entirely–condos.

That means a possible net change of ZERO rental units. If the building is going to have any impact on the housing market it will be to slow the appreciation of value of properties for sale. Whereas there is currently a dearth of properties in move-in condition for sale in the neighborhood, there will suddenly be a burst of units available in various sizes.

Rising rents are a problem for some in PLG, just as they are in every urban neighborhood in a period when people are flocking to cities. PLG will continue to see rising rents whether or not this tower goes up. Tenant advocacy–and preserving the existing rent stabilized and rent-controlled apartments in our neighborhood–is a much more fruitful avenue for addressing the problem than trying to stop a single building that will itself displace nobody.

The real objective behind the formation of CRGPLG seems to be stopping a tall building from going up near Lefferts Manor. If that means shifting blame for the basic economics of supply and demand, exaggerated warnings about the coming avian holocaust, or stoking fears about gentrification, so be it.

It may all be moot anyway. As the protest was going on, a back-hoe was busily moving about the site. It was probably getting the site ready for the foundation to be poured so that the developer can lock in the current zoning rules and make the next protest even more toothless.

Editor’s note: there seems to have been no work done on this project since early July. Only time will tell if the situation is really moot

This entry was posted in News and tagged architecture, community, residents. Bookmark the permalink.